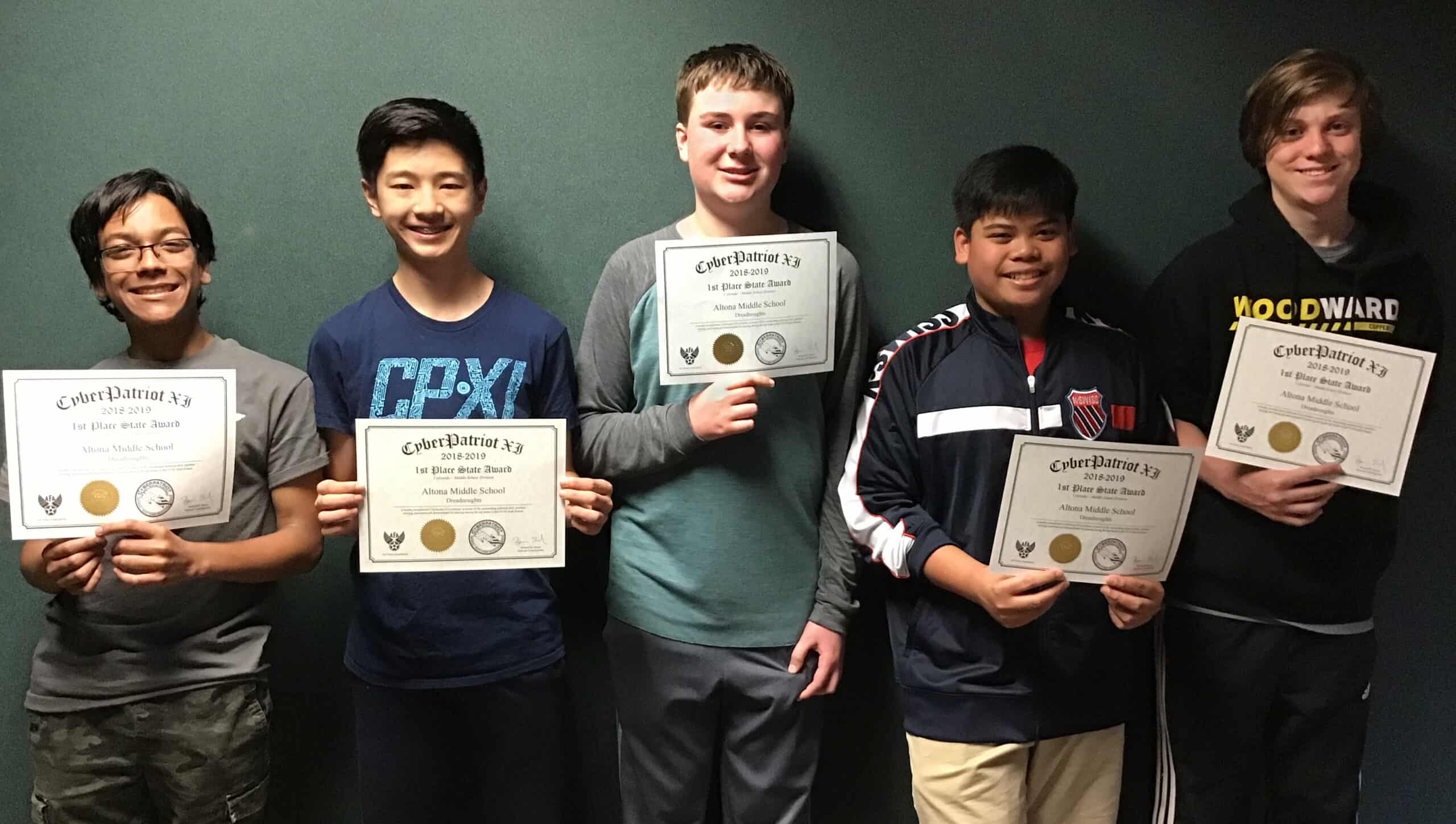 Over the past two years, Altona Middle School CyberPatriot teams earned 3rd place in the National Youth Cyber Defense Competition, students were rightfully proud and pleased. When one of their teams captured a first place win this spring, they were beyond thrilled. The team, comprised of 8th graders Andre Aquino, Rajarshi Bose, Alexander Davis, Mason Steffen, and Luke Xu, successfully competed against 67 middle teams in Colorado (including 7 other Altona teams) and over 840 teams in the U.S., Canada, and DoD schools around the world.

CyberPatriot is a national program educating youth about cybersecurity. Former cybersecurity manager for the U.S. Department of Homeland Security and father of two Altona CyberPatriots, Dan Massey, pitched the program to Altona Computer Science teacher and club advisor with intimate awareness of both need and potential for students’ future opportunities. Massey, who is developing a cybersecurity program at CU Boulder, now coaches five teams after school as a volunteer. Both Massey and Kelleher are beyond thrilled with the diverse level of participation. “Everyone isrepresented,” Kelleher says. “Fifty percent of our participants [in this year’s National Youth Cyber Defense Competition] werer female. In the computer industry today, if you can reach twenty percent women you’re doing well. We’re changing that.”

The National Youth Cyber Defense Competition was created by the Air Force to inspire students to pursue careers in cyber security or other STEM fields.  Originally limited to Civil Air Patrol competitors, AFA later expanded the program into high schools and middle schools. This year, in addition to the first place win, half of all Altona teams ranked in the top twenty percent nationally.

During competition, students act as newly hired Information Technology (IT) professionals or system administrators tasked with managing the network of a small company. During rounds, students must locate and patch vulnerabilities while maintaining critical services. “Entering round three, we were barely ahead of two other teams. We were feeling tense throughout six hours of straight-up working,” says Aquino. Teammate Alex Davis adds, “We were nervous and unsure whether our work would hold up against the other top teams in Colorado.” Held up it did. At the end of the preliminary season, they ranked 37th in the world.

Whether or not Altona’s CyberPatriots maintain their winning streak, these dedicated students and their mentors know they are paving the way for a bright, secure future…theirs, and ours. “As Internet has grown and governments, businesses, communities and individuals are increasingly exposed to cyber threats, the need for cyber security experts has also expanded,” Kelleher says. “We’re equipping students with the skills to walk right out of high school and begin well-paid, high demand careers with companies that also pay for their higher education,” Kelleher says.