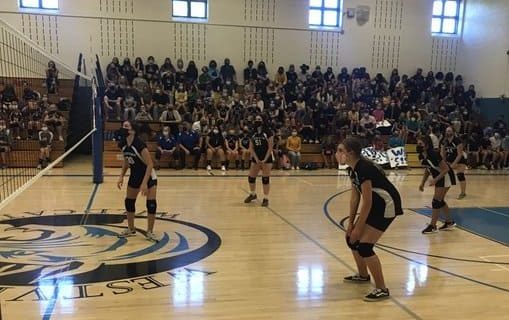 The return of middle school intramural athletics has students across the district more engaged and involved in their school communities. Participation has soared at both Westview Middle and Longs Peak Middle, and the record-breaking number of athletes have brought students, parents, and teachers out to pack the gyms. With volleyball season winding down, we take a look at how middle school athletics has impacted student morale throughout the district.

At Westview, principal Mark Spencer has not seen a noticeable change in numbers given the school’s traditionally strong participation in athletics, but he has observed a boost in student morale as athletes take advantage of the opportunity to participate again. “Athletics have been a game changer in the atmosphere at school. We are seeing kids walking down the halls happy and laughing,” said Mark Spencer, Principal Westview Middle School. Students have been sticking around after class to support their peers. Last Saturday, Westview welcomed Trail Ridge for the final games of the volleyball season. The teams got tremendous support, with the loud gym resembling a high school atmosphere and a pizza party capping off the festivities.

The Covid pause gave principals a chance to reset the norms around middle school intramurals. According to SVVSD Executive Director of Athletics Chase McBride, the pause allowed for “formatting changes and more equitable and competitive contests.” A big change this year has been middle school hosting all intramural competitions, rather than high schools. This has helped maximize participation in athletics and made it easier for students, parents, and staff to support athletes.

At Long Peak Middle School, this was especially true. 80 girls came out for volleyball, up from the 40 that came out in principal Sandy Heiser’s first year at the school. “Students who had never come out for anything wanted to be involved and spend a little more time at school – they crave connection and are active in all the things they missed last year,” said Sandy Heiser, Principal, Longs Peak Middle School. Excitement builds all day on gameday, with athletes wearing their jerseys throughout the day after morning practice. Heiser says that the competitions have provided a boost for staff too, who come out to support their students and have a fun, positive conversational piece to connect with their students on.

So what’s up next for our student-athletes at Westview, Longs Peak and the other middle schools across the district? Soccer season is already underway at Longs Peak, and basketball season starts next week for both Longs Peak and Westview. More than 160 students have attended basketball practices at Westview already, and the combining of 6th, 7th, and 8th graders onto one team allows 8th graders to become mentors for their younger peers.

We commend the work that staff has done across the district in encouraging students to engage and be involved in their communities outside the classroom, and we wish every student the best of luck as they continue working hard and creating long-lasting memories outside of the classroom!